By now, everyone who would be reading this has heard of the terrible tragedy that took place at the Boston Marathon. You probably have been watching the nonstop coverage on the news. You have seen the gruesome pictures and have heard the eyewitness accounts. You’re still trying to understand why someone would do something so terrible and your heart has not stopped aching for those directly affected.

I was one of the 23,000+ runners in yesterday’s race. If yesterday went as planned for me, my family and I would have been at the finish line around the time when the bombs went off. Instead, I was one of the thousands pulled off the course when the race was shut down. This is a story I wanted to tell… mostly for myself. I guess I am still having a hard time believing it all happened.

I had been casually training for the 2013 Boston Marathon for almost nine months. As a 400-meter sprinter in college, this sort of mileage seemed totally crazy to me. Still, I was looking forward to taking on a new challenge as a graduate student at Tufts University. And, despite some bumps in my training (tendonitis in late February, Norovirus in March, and nasty cold the week before the race) I had high hopes for Marathon Monday.

It was a perfect spring day in Boston. I was running the race with my friend Meg, another grad student that I had been training with. We were in the very last starting wave (Wave 3, corral 9)  and started the race around 10:50 am. We had a slow start to the race, mostly due to congestion. We also were cautioned about foolishly starting our race too quickly. Our goal for the day was to finish around 4 hours (about 9-minute miles) and run negative splits, i.e. run our second 13 miles faster than our first 13.

We were incredibly excited for the day and the Marathon supporters did not let us down. For those who have not attended the Boston Marathon, the journey from Hopkinton into Boston is truly an incredible experience. The support and energy from the community is indescribable. There was never a quiet or dull moment on the course. Music, cheering, and countless high fives–I have never felt more supported as runner. I don’t think I stopped smiling… at least for the first 10 miles.

Unfortunately, I never really got into the rhythm with my stride. After our first 5-6 miles, Meg was ready to start picking up the pace. I, on the other hand, wasn’t feeling great. My legs felt heavy. Normally a 9-minute-mile pace feels relatively easy for me but I couldn’t get myself there yesterday.

Around mile 12, I started feeling a little nauseous. Maybe I drank too much Gatorade. Maybe my body was still recovering from the cold I had the week before. Around mile 15, my cramps were just getting worse so I insisted Meg go ahead and told her I would try to catch up to her towards the end of the race.

Around mile 17, the sides of my feet started going numb. I felt a vaguely familiar twitch in my right calf muscle. I stopped for a minute to stretch. Minutes later my muscle spasmed so badly I fell to the ground. My calf was knotted hard as a rock and wouldn’t release. Within seconds, a bike patrol officer was at my side. He radioed for help and a wheelchair to bring me to the medical tent. I told him I would be okay and after a few minutes began running gingerly again.

But I couldn’t shake it out. Muscle spasms took me to the ground 3 times between miles 17 and 20. The third time, my feet locked out and I was unable to walk for a few minutes. After seeing this, one of the safety officers insisted I stop in at the medical tent. I did so, upset as I realized I would not finish within my 4-hour goal. Because my spasms were fairly severe, they ended up drawing blood. As I was waiting for the blood test to finish up, a doctor came storming into the tent.

“You guys need to look sharp in here! There was just an explosion downtown. A bomb went off at the finish line. Seriously, watch yourselves.”

My heart dropped. My parents were supposed to be at the finish line. I checked my watch: 3:40.  They expected me to finish around 4:00. They were there waiting for me. I knew it. Unable to speak for a few minutes, I eventually loudly sputtered, “My… My parents are there!”

One of the volunteers, without hesitation, handed me her cell phone. I called my mom’s phone immediately but it went straight to voicemail. I left a worried message, returned the phone and told the medic team I was leaving.

After leaving the medical tent around mile 20, I took off running to tackle the rest of Heartbreak Hill. I was anxious to make it to the finish line… or at least to mile 23, where my boyfriend was waiting to cheer me on. I was so nervous that I forgot about the pain in my legs for awhile and picked up a decent clip around 8 min miles, which confused the spectators around m since I was running in a much slower cohort at that point. Still, everyone cheered me on enthusiastically. “Wow! You go girl! … Go Tufts! …You look awesome! Keep it up!”

Clearly they hadn’t heard the news from the finish line yet. I looked at them all, bewildered, like they were a part of a movie I was just watching. Their smiles and cheers seemed so out of place in my world. As I passed the (mostly drunk) college kids from BC, police cars and ambulances began zooming past the runners on the course. I could hear people begin talking about what was happening. Most runners were just looking around, confused. We kept running until we reach a road block: Police cars and a few dozen officers standing in the road with their arms straight out.

“The race is cancelled,” one told us. “The course is closed. You all need to just wait here for now. Get out of the road so that the emergency vehicles can get through.”

I became frantic and ran over to the spectators, “I need a phone! Does anyone have a cell phone I can use? ”

I dialed my Mom’s number again. This time the call wouldn’t go through. I dialed again. I got the same result. I tried my Dad’s phone next but still was unable connect.

Then I just stood there for a moment, numb with disbelief. I handed back the phone I was using.

But I soon began thinking the very worst. I knew that my parents, dedicated and supportive as they are, would be at finish line. After all, that is where they told me they would be. I looked around at other people on their phones and again got the sensation that this wasn’t real life.

A police officer informed us that buses were coming to pick us. “To take us where?” we asked, the officer said he didn’t know.

I looked around as EMTs began handing out space blankets to runners. The scene was strangely calm. Runners limped around, asking the different volunteers questions they were unable to answer. I wrapped a space blanket around myself and asked a woman if I could use her phone. I texted my parents this time

“Are you OK? I am stopped near BC…They won’t let us through. “

I then called my brother, who was out of town… but perhaps had heard from my parents. On my third try, I finally got through to him. I put the receiver to my ear and heard a broken voice “Kay! Kay! Are you okay? Where are you? Kalyn!”

I sobbed, “Christian! There was an explosion…. at the finish line! I can’t get a hold of Mom or Dad! I can’t find them! I can’t call anyone.”

He told me he had talked to Mom briefly but they had been disconnected. And he sounded so worried.

But just that moment, the phone I was using started vibrating. I looked at the screen and saw a text message from my Mom’s number.

I dropped to me knees and started crying. I told my brother to try calling my parents (since for some reason he was able to call in) and tell them to meet me at my apartment if they could. I put down the phone, put my face in my hands and cried. A few moments later, I felt myself being hugged and rocked by a complete stranger–the woman whose phone I had been using. She rubbed my back and said, “It’s going to be okay. Everything’s okay now.”

And she was right. For me, my family, and my friends… everything was okay. Somehow my family got in touch with my boyfriend who came and picked me up at the church that we runners were eventually corralled into. I started crying again when I saw him as I hadn’t even considered how worrisome the day was from the spectator side.

They said the noise from the explosion was tremendous. They told me they felt the ground shake; saw the cloud of smoke and debris come towards them; and heard people screaming.

If I had run the race I had been training for, my 4-hour race, I would have been crossing that finish line right around when the bomb went off. And my parents, devoted and supportive as they are, would have been there… waiting for me. And I just keep

thinking how it would have been partially my fault if something happened to them…and how I don’t know how I could live with myself knowing that. While I am so happy that my friends and family were unharmed yesterday, I am still trying to make sense of the day’s events. Especially when I think of  little Martin Richard, who was at the finish line, cheering on his father. He was just 8-years-old and was killed in the explosion. His older sister survived but had one of her legs blown off. His mother has terrible injuries as well.

I don’t know why my family got to be one of the lucky ones. But I supposed all I can be is grateful.

My legs were too sore to do much of anything today. Another friend offered to pick up my race bag for me. This is the bag that held all of my belongings from the starting line, as well as warm clothes that normally would have been waiting for me at the finish line. My friend tells me she was emotional picking up our things but that BAA volunteers were still there to meet her. They greeted her with loud cheers, big hugs, more tears..

….and our Finisher medals. 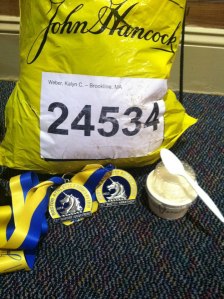 Fan of triathlon, craft beer, and anything outdoors. Supporter of equity and social justice. Health care pro working in Boston. View all posts by Kalyn

16 thoughts on “My (unfinished) Boston Marathon”