What does it mean to show support?

I’ve come back to this question a lot this week. Often support just means money: Whether it is traditional patronage, i.e. supporting local breweries by spending too much of my disposable income on craft beer, or donating to NPO whose cause you support, i.e. for my birthday I donated and collected donations for the organization She Should Run.

But sometimes “support” is subtler, more personal. For example, my husband supports me in triathlon by taking care of the dog in the morning so I can train.

I mention this because, like so many others, 2017 made me angry (see #metoo movement for details). Every election, every corporate restructuring, and every misogynistic comment helped nourish the nasty seed in my head that the cards are stacked against women and minorities in an infuriatingly real way.

Obviously this wasn’t new to 2017… but this past year pushed me to where I had to start doing something productive. So I decided at the end of last year to start consciously and directly supporting women.

Triathlon was a good place to start – it’s another thing I throw an obscene amount of money at. I joined a women’s triathlon team founded by pro triathlete Angela Naeth (a woman and badass athlete that’s had to overcome a lot in the sport) and volunteered to help out the team however possible while serving as the Regional Director for Boston.

Side note: feel free to talk to me directly about joining IRACELIKEAGIRL.

Then there’s coaching. Coaching is one of the most obvious examples of the double standard: At the elite level, it’s perfectly acceptable for men to coach women and women’s teams but the reverse is rarely true. A reminder that there are certain power dynamics we are comfortable conforming to and a certain type of person that we trust as “experts.”

So, I started working with a female coach in October. From high school through college athletics, I’ve had many coaches in sport, but this is my first time working directly with a woman. That’s kind of crazy, right? Working with Coach Karen has been amazing and I’m 100% confident it was right the move.

But these things were relatively easy. They’re largely symbolic, grand gestures that make me feel like I’m contributing to the solution instead of the problem. These actions, however, are not how you change a system. Real change is wayyyyy more complicated, baked into our day-to-day interactions, how we do business, how we interact on social media, what we choose to blog about… 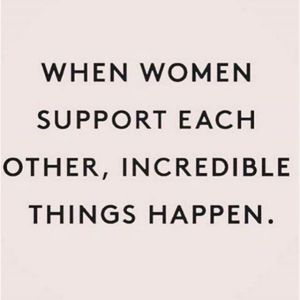 Fear of backlash is a common reason why we stay silent… and why things stay the same. So if we want change, we have to support things we believe in, loudly and publicly. Where you have a voice, use it, wherever and however you can.

So I am using mine. Here. At work. Online. Wherever possible.

If you disagree, you can “unfollow” or “defriend” me… but I’d much rather you let me know in a constructive way. Drop me a suggestion of how you go about supporting positive change. I’d love to hear from you.

Fan of triathlon, craft beer, and anything outdoors. Supporter of equity and social justice. Health care pro working in Boston. View all posts by Kalyn

7 thoughts on “What does it mean to show support?”