I write this from the passenger seat of our car as we head back to Boston. It’s the first time since the fire  that I’ve had a few minutes to really sit, think, and reflect on all that’s happened. As I stare at the other side of I-90, my mind can’t help but travel back to last Monday and recall how different our emotions were when were flying in the opposite direction.

Last Monday started out as a normal day. I went to work, came home, poured myself a delicious Tasteful Deception while I made dinner. We were just finishing eating when my friend from back home texted me. 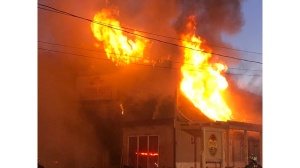 “I’m sure Christian or someone on staff is already calling you but I’m at Common Roots and there’s a fire… Everyone is out safe, and Christian is talking to the firefighters but just wanted to let you know.”

I immediately called my mom and that conversation will pain my heart for the rest of my life. She answered sobbing and screaming, “KALYN! It’s gone! It’s all burning.”

“Mom, is everyone okay? Where are Christian and Dad?”

Through sobs, she let me know that everyone was safe but even still, I’m not sure I’ve ever heard her more upset.

I hung up and told my concerned looking husband, Evan, “It’s bad. I need to get up there.”

He quickly replied, “I want to come with you”. We were packed and in the car 15 minutes later. 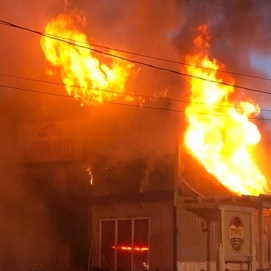 The next 3 hours seemed to crawl by. We spoke to one another occasionally, but mostly sat in quietly with our thoughts – too shocked and saddened to articulate anything in depth… and maybe hoping that not mentioning our fears out loud would somehow stop them from becoming true. I checked my phone periodically as the online footage of the brewery burning continued, tortured by the fact that all I could do was watch painfully through a screen, still miles away.

As I sat there then and as I sit here now, it’s impossible still for me to not feel incredibly saddened by what was lost in that fire. My mind flashes back to the early days… when my parents and brother first purchased the old building that would eventually be transformed into Common Roots Brewing Company. My heart sinks as I think about all the effort my dad, brother and so many of our friends and family members put into renovating the space. I remember whenever we were in town, which was more frequently in those days, they’d always find us a project to work on. There was always so much to do then, and we were eager (and still are) to be a part of it.

As time went on, there would be more and more “finished work” to see when we returned home. My dad or brother would lead us around, proudly showing off their newest project, building fixture, or piece of equipment. Christian’s token phrase became, “What do you think, ehh?? It’s a BREWERY!”

My brother’s excitement, even in periods of exhaustion (which was also frequent then), is contagious.

These memories are the ones I need to keep pushing back down for the time being. For now, they still hurt just a little too much.

True, it was just a building and its contents that burned…but overtime our brewery had become almost a member of the Weber family. It was like our youngest sister that we all collectively wanted nurture and see grow and develop. I’d brag to my friends about her, show off pictures, and tell stories about how she was growing.

So, when I finally arrived at the site on Monday night, I knew it was going to be hard. And it was. 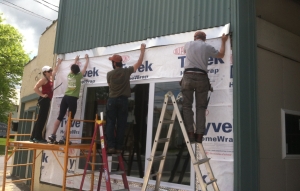 Because we were arriving so late, most of the crowds had already cleared. Christian and my father were standing out front aside one of the few remaining firetrucks, staring at the still-smoking devastation from the street. My dad saw us first and greeted me how he usually does, “Kay-Webs!” and put his arms out for a hug.

“Dad…” was all I got out before I started crying.

It was. But as days went by, we processed that sadness together and breathed through our relief that no one was hurt, and that the situation wasn’t much worse. 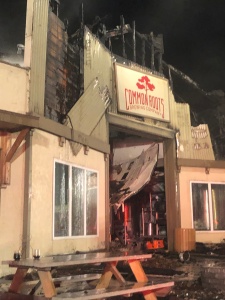 For example, I was incredibly fortunate to be able to stay in the area with my family all week and bear witness to the outpour of support from the community. Within hours of the tragedy, friends and former employees were already rallying to organize benefit events and fundraisers. Countless people and organizations have reached out to see how they can help and offer kind words of support and encouragement. It’s been unbelievable. To say we are touched would be an understatement. We are grateful, humbled, and truly in awe of the kindness and generosity of the greater community.

It is clear to me through all of this that the “Common Roots Family” has grown to be much, much bigger than the Weber family alone. That family is strong and will keep pushing forward.

There are many tough months ahead, but I’m excited to return home on weekends in the future and see the progress that takes place at Common Roots. And while they may not be doing the actual construction this time, I expect my dad and brother will once again lead me around the brewery and point out new developments they’re proud of. Eventually, they will again find that contagious excitement that fueled us all in the very beginning.

I’m excited for that time and am prouder than ever to be a part of this Common Roots family.